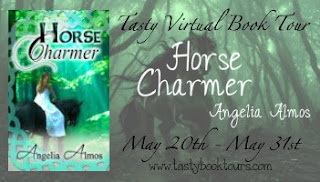 As promised, today I am happy to have fellow writer Angelia Amos, author of the YA Fantasy book, Horse Charmer guest posting today on my blog.  This is the last day of her Tasty Book Tour and one of her last stops.  If you'd like to check out her other tour stops you can find them HERE.  Angelia is giving away a $20 Amazon/B&N giftcard.  If you want a chance to win, you must enter through the Rafflecopter below. 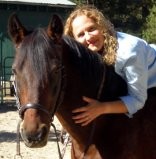 I don't often think about myself at that age. Probably because I was so focused on my "future" and that future didn't really include being a wold-famous writer. :-) Nope, my goal was to become a world-famous Olympic 3-Day Eventer (a horse sport focusing on dressage, show jumping, and cross country). I wanted to be a trainer and professional rider.

I had taken the high school proficiency exam when I was sixteen so I was now attending the local community college taking my general education classes so I wouldn't have to take the SAT's when I transferred to a four year university when I turned eighteen. Each semester I took two core classes and one light-elective class. Not quite a full load, but enough to keep me busy and on the campus four-five days a week.

At home, I was riding my hyper-active show horse every day. Some days training while other days riding with the kids in the neighborhood. I showed regularly in the local schooling shows in show jumping, but steered clear of dressage since I still couldn't ride anything close to a complete test with my horse not throwing a major tantrum (she hated flat work). Her hate for anything involving control at a low speed (she was great jumping and cross-country) meant I wasn't heading out to any 3-Day events on my horse anytime soon. The main reason for my focus on getting into one of the few of the four year private colleges on my list - all of them had equine degrees with riding as a focus. My plan was to ride and train many different types of horses to give me the knowledge and experience I would need to then start working toward being competitive in the eventing world. At the same time, I'd be earning my BA in case I changed my mind or it didn't work out. I would also double major with a back up career. Guess what that career was? Yep, writer. Ha Ha. I though it hysterical that I was going to be double majoring in Riding and Writing. Say it out loud to fully get it. :-)

Now I'm not even half-way convinced I would be a professional rider and horse trainer right now if I hadn't decided to switch over to writing for a career and riding for pleasure (hobby). I don't think I have the personality to be successful in that field. What's funny is thinking back on it, I was training just as hard to be a writer. I devoured every type of story I could in movie, television, book and online writing, and gaming during my "spare" time. Not on purpose, but it was all there. I read constantly. Was a daily regular at the video store. And followed my favorite shows faithfully. I would rather watch the latest episode of The X-Files then hit the town with my friends on a Friday night.
I do remember I was pretty happy at seventeen. Riding my horse for hours every day, taking college classes, watching lots of TV/Movies, and reading late into the night.

*Horse Charmer is on sale for $.99 (ebook) to celebrate the two year anniversary*

A gifted princess. A special horse. A quest for the truth.

At sixteen years old, Cassia would rather spend her days in the royal stables than in the royal court. But as the eldest child of King Robet and Queen Sarahann she obediently performs her duties as the Princess of Karah.

Her safe world changes forever when her father is murdered in the neighboring kingdom of Vespera. Cassia grapples with his loss as her mother prepares her for her new role as queen. Her first task - she must travel to Vespera to marry a prince she barely knows to fulfill the treaty her father signed just before his death.

Nothing is as simple as it seems with political intrigues and unusual powers shadowing Cassia on her search to find out who killed her father and why.

Author Info
Angelia Almos' love affair with horses began when she was five years old and talked her parents into her first riding lesson. Horses have always been a huge part of her life. The initial idea behind Horse Charmer came to her when she was fourteen. The image of a teenage girl riding her horse through a meadow appeared. Who was this girl? Where was she going? What was she running from? Those questions led to the creation of Horse Charmer.
Author Links
Facebook: http://www.facebook.com/AngeliaAlmosAuthor
Twitter: http://www.twitter.com/AngeliaAlmos
Blog: http://angeliaalmos.blogspot.com
Website: http://www.angeliaalmos.com
Google+: https://plus.google.com/109925456863894987370
Goodreads: http://www.goodreads.com/author/show/1027877.Angelia_Almos

a Rafflecopter giveaway
Posted by Courtney Rene at 3:00 AM