Side Slip, by Mike Fuller

I want to welcome Mike Fuller, the author of Side Slip his new release, to my blog this week as one of the stops along his blog tour.  Mike will be giving away a digital copy of one of his books to a randomly selected commenter.  Therefore, take a moment and say hello. 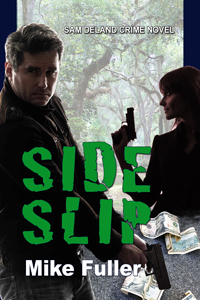 Where you can Buy at: Rogue Phoenix Press, Amazon, Barnes and Noble

Side Slip is not an easy read, but well worth it. There is nothing predictable about this book, but it does have a sort of familiarity. It has everything a crime novel reader could want.  There are decent plot lines, but it is character driven all the way, which is why it is sometimes hard to read. Fuller has made the characters so real that the reader sympathizes with them, even the bad guys. And he gives you a wide range of characters to choose from, Pennsylvania State Troopers, Male and Female, Florida Sheriffs, Male and Female,  Farmers that used to be Navy SEALS, Dope seller/ murderers, crooked cop/burglars, and dogs.

Side Slip is worth the read.

TAGLINE
Cops, mobsters and murder all mixed up and no one knows where it will end. But smart, tough and lucky swirl together to push the action through the chilling story of both good guys and bad.

BLURB
Stuck in paradise and he isn’t very happy about it. Even the beautiful lady detective that gunned down the man trying to kill them both can’t get him to stay. Corporal Sam Deland wants out. Back to work leading his squad of state troopers and home where he can take up the life he had to put on hold. But Sam isn’t the only one wanting him to return. The woman he left behind is waiting for him and so is the Russian Mob. Sam’s past is catching up with him, and he doesn’t see it coming, yet. Detective Christie O’Shea, the pretty Florida cop that nursed Sam back to health won’t have the time to miss him when he’s gone. Murder is what she’s paid to solve, and she has to go after a killer that has sent shock waves deep into the police community around her. A triple play of heart stopping and heart warming suspense, action and life as Sam, his troopers and Christie all find they are in the middle of murders and mobsters. A story that twists and turns through the investigations and the lives of characters you will grow to know, to cheer and to fear. Sharp dialogue, real characters and enough drama, humor and mystery to keep the reader up late not ready to put it down yet. Another thrilling Sam Deland crime novel from the author of Sink Rate and Rope Break.

EXCERPT
The search for a hidden key did not go well. All the usual spots came up empty. Dickie went down the steps to the garage but still no luck and then back up to where Ray stood next to the front door and sighed, "Well, ain't no key. Let's get it over with."
The pry bar didn't get it done. Ray had to whack the deadbolt a couple of hard hits with the sledge before the door flew inward. Dickie started in and stopped short. He smelled cinnamon. Ray almost ran into his back. Probably one a them plug in thingys.
Dickie held up his hand and then swiveled his head back and forth, trying to adjust to the slightly brighter light inside. Dickie heard nothing except the clicking of a wall clock somewhere. He shrugged and crossed to the kitchen door at the other side of the living room. Ray split to the right and did a quick walk through of the downstairs.
They met at the foot of the stairs and Ray pointed to a metal cabinet next to the cold fireplace, "I'll start on that, give me the bar, eh?" It wasn't a real gun safe, just a thin metal locker meant to keep kids away from the guns.
Dickie handed the pry bar to Ray and started up the stairs, shining the flashlight as he moved out of the light cast by the lamp. The cash and handguns were usually in the bedrooms. There seemed to be three upstairs and a bathroom. Dickie had to piss by now and stopped to go. He started and almost pissed on his hand when he realized there was a candle in a glass jar burning on the tub rim. That appeared to be the source of the cinnamon odor and was certainly the source of big trouble.
Ray was pounding loudly on the metal cabinet downstairs, and Dickie almost shit his pants as the figure of a small woman in a bathrobe passed by in the hall just outside of the bathroom. Dickie didn't even zip up his jeans and stuck his head out of the bathroom and looked down the hall. The small woman was there leaning out to try to get a look at what was making all the noise downstairs. Dickie's blood turned to ice when she turned toward him, and he saw the black automatic in her left hand.
She hadn't seen him yet. She just stood there but then turned to go back toward the bedroom. He knew there was probably a phone there, and he couldn't let her get to it. He tried to melt into the small space between the sink and the door, and as she moved past, he stepped in behind her and grabbed at the gun.
He missed. All that police training didn't help. She yelped and turned the pistol toward him. It was not quite full dark in the hall and Dickie could see it happening and knew what was coming. Without hesitating, he swung the heavy flashlight and struck her across her left cheek. The blow emitted a sickening crunch as bone gave way to the heavy metal light. She staggered but did not go down. The gun was waving in the short space of air between them and Dickie expected it to spit flame and his death at any moment. He stepped into her and brought the flashlight down with all his strength on top of her head.
She followed the motion of the blow and crumpled onto the hallway floor. Dickie was breathing in gasps by now, but he could still hear Ray pounding metal on metal. He tried to hit the button on the flashlight to see if the woman was still conscious but his finger slipped across. The wetness puzzled him for a moment but he got the light to come on and as he played the beam down on the figure at his feet, he was surprised to see blood dripping off the end and falling through the shaft of light onto the pink bathrobe of the very dead woman beneath him. 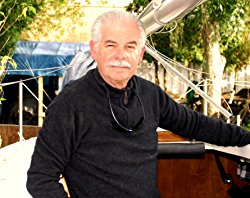 Mike Fuller Bio
After writing professional documents for many years, Mike has finally devoted time to his true passion, writing fiction where the story and characters come alive in the reader’s mind. While his days were filled with authoring hundreds of detailed crime reports, arrest affidavits, search warrants and grand jury presentments, he took some of his own time and devoured books by the dozens. Reading not only was a rewarding diversion, it provided him with the added education he needed to function at a high level in his profession.

This has led to the creation of Mike’s crime/suspense/detective novels Sink Rate, Rope Break and Side Slip, the first three in the Sam Deland Crime Novel series. All are expected to be published in 2015 and 2016 by Rogue Phoenix Press

Mike writes with the real life experience that many years of law enforcement shaped and influenced. The stories may be fiction but are based on how things happen in the real world.  His books are honest and captivating novels written with a unique voice that will both chill and charm.

Mike is a veteran police detective. He did it all from rookie patrolman to Senior Special Agent. His life has been enriched by a wonderful marriage, parenting, work, flying, sailing and good books. Mike is a lifelong outdoorsman, an experienced tactical firearms instructor, champion sailplane pilot and the captain of his own sailboat. All of these skills have made his novels vivid, exciting and real. Now retired after a career with three law enforcement agencies, Mike enjoys winters writing in Naples, Florida and summers sailing, writing and researching the next novel at his rural Pennsylvania home.

NOTE:  Mike will be giving away a digital copy of one of his books to one randomly selected commenter on his blog tour.

Posted by Courtney Rene at 12:30 AM No comments:

Last week I did an author post for The Black Coach.  I have read the book and decided to post a review of it as well for my readers.  If you are into Mystery and Romance, maybe you should give it a read.  Have a great week everyone. 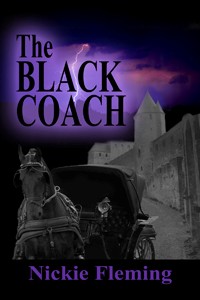 Maggie Thompson, an orphan flees from an abusive household, and is then rescued by a mysterious man, Neil Harrington, but strange happenings continue to follow in her wake.  Two girls are found murdered, there is a strange black coach that is traveling the roadways at night, and a man is searching for Maggie.
The Black Coach took off and engaged the reader from the start. Maggie although struggling with life trouble at the beginning, shows herself to be a strong character and I connected with her right away.  Her inner battles and her strength, paired with her kind nature, makes you cheer her on from the other side.   Neil is a question.  Who is he?  What is he doing and is he a good guy or not?  The intrigue and the romance make for fun read.  The story stayed strong throughout and the book and kept you moving along at a nice pace.  I enjoyed the read.  The author makes believable characters and realist dialogue. The mystery and romance made for an easy and enjoyable read.
Posted by Courtney Rene at 7:03 AM 1 comment: