I am honored today because a fellow author has awarded me with the Encouraging Thunder award! 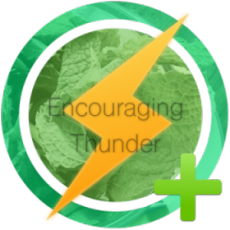 What you can do with Encouraging Thunder award?– Post it on your blog   - Check!– Grant other bloggers with the award  - Pass

What you can’t do with Encouraging Thunder award?– Abuse or misuse the logo    - Check!– Claim that it’s your own handmade logo     - Check!

What you should do after receiving Encouraging Thunder award:
– Enjoy the award     - Check check!– Thank via comments or mention the blogger who gave you the award  - Check!

That’s it. No questions to answer or cumbersome rules to follow. It’s acknowledgment to those blogger friends who have stuck behind you through good times and bad, whether through comments, social media, email, etc.

Thank you so much, Allyn for thinking of me for this award.  I am going to enjoy my award and brandish it proudly.  Thank you for always giving me encouragement as well as listening to me during my moments of struggle.

Be sure to check out her blog for more information on her current publications and books.

One more thing before I go this week.  Did I finish my first draft of my current WIP?  Why, yes!  Yes, I did. Stay tuned fans and readers, I will have a exciting new book and story for you soon, I hope.

Posted by Courtney Rene at 12:11 PM No comments:

Summer is in full swing and it’s cold as heck.  I mean so cold I thought about actually turning on the heat this morning.  I didn’t, but only as it seemed wrong to turn on the heat on June 1st.  Instead, I put on extra clothes and turned on the little space heater in the entry way, to break the chill in the air.  What the heck?  Where’s the sweltering heat?

So? Did I finish the first draft of my current WIP?  Nope.  But there is a good reason.  As I progressed through the book, it was turning more and more into a series book.  I didn’t want that.  I want a full stand-alone story.  Why?  I don’t know, I just do.  If a publisher later on wants a book two, it could be a branch out book with new characters added in with their own story.  But I wanted Grace’s story to finish, to have an actually happy ending.  What that means though is, it appears this book is going to be a bit longer than I first anticipated as it reaches an actual end.  However, it’s coming along very nicely.  I hit the 60,000 mark last week and I am pressing forward.

This week is the end of the dance “school” year.  We have our end of the year recital, which means I will be in dance hell for the week.  Costumes and makeup and hair, dress rehearsals, and so many shows, it’s going to be insane.  I am praying for patience.  But, then I get a break, a short one-week one, but a break all the same.  Plus it’s fun to see how everyone ended up for the year.  What they learned and how they progressed.  The children look forward to it and that’s the whole point after all.

I am still looking for at least one review of A Howl in the Night. Did you read it?  Did you review it on Amazon?  If you didn’t know, the one good way to help out an author is to write a review. Just sayin.

Here's a link to help you out:  A Howl in the Night