I watched the movie, The Raven, over the weekend.  I didn’t know what to expect, but as I am a fan of both John Cusack and Edger Allen Poe, how could I go wrong, right?

I should begin with I am a fan of Poe, and I have read so many of his stories that I can’t even begin to count them.  Let’s just say I have probably read almost all of them.  Maybe not the more obscure, but mostly.  Now even knowing that I am a fan of his work, I had never once actually looked the guy up.

So, I did this weekend while watching the movie. First, he is a bit of a nondescript fellow. Nothing outstanding in his form or hair or eyes, however, he does have a bit of a sad face.  It's in his eyes.  Don't you think?  Not so much the turn of his mouth even, but something there as well. 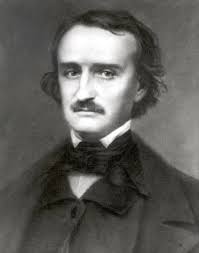 That was my first impression, then I read his bio and go figure, he was.  Poor guy.  Born January 19, 1809, in Boston.  We know him as a writer of short stories, but he was also a reviewer and harsh critic.  Hey!  Me too!  See how much we have in common?

His early years, were rough.  His father left to pursue his career as an actor, and his mother passed away when he was a small child, around 3 years old.  He was sent to live with family in Virginia, separated from his siblings.  Doesn't say why he was separated from the rest.  He grew and went off to college.  While away and gambling away his money, his fiancée, Elmira Royster, dumped him and became engaged to someone else.  Edgar was quite heartbroken over this.  He joined the military and went to West Point where he was kicked out after only about a year.  Some say he wanted to be kicked out.  This was in fact his plan.  The military not being for him after all.

After leaving the academy, Edgar went to live with his aunt Maria Clemm and her daughter Virginia. His young cousin, Virginia, became not just his inspiration but his love interest as well. They were married in 1836 when she was only 13 or 14 years old.  IIIICK!  Don’t get me wrong I understand people were married young at this time, but 14 and his cousin?  Eww.

Moving on.  After the death of his beloved, Virginia to consumption in 1847, Poe was overcome by grief.  He continued to work and review and be a hard critic, he continued to suffer from poor health.  He also continued to be financially a wreck.  He drank…a lot.  He gambles…a lot.

Then you have his final days on this earth that are to this day cloaked in mystery.  On October 3, 1849, Poe was found in Baltimore quite upset (raving mad). He was taken to Washington College Hospital, and four days later he died there, on October 7.  His last words are reported to have been, "Lord, help my poor soul."  He also appeared quite desperate by calling out the name, “Reynolds” over and over.  To this day, no one knows why.
At the time, it was believed that Poe died of "congestion of the brain." But his actual cause of death has been the subject of endless mystery. Some believe that his alcoholism led to his untimely demise while others offer up several other theories. Rabies, epilepsy, carbon monoxide poisoning are just some of the conditions thought to have led to his death.
What a wild and sad life he led.  Constantly struggling throughout his life for money, for fame, and for love.  It is said that both his mother and his wife died in his arms.  Oy!  How sad.  It is also believed by some that he was haunted by the stories he created and that was part of what lead to his severe alcoholism.

Back to the Movie.  It was interesting in parts, and boring in parts, but a thriller it was.  If you have the time and enjoy a good dark story, this would be a good. If you are a fan of Poe you will like it.  If you aren't, you may find yourself a bit...bored.

Now I am off to see if I can hunt down one of my many books filled with stories by Poe.  I could use a good spine tingler.

Have a great week everyone.
Posted by Courtney Rene at 10:06 AM