This week I am happy to announce that I have Author, Edward T. Keller, with me on my blog. 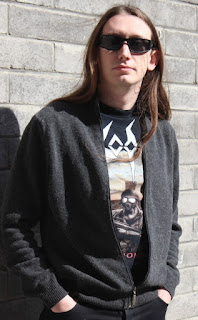 Bio: Ted Keller used to be a journalist, metal lead guitar, and a pretty wild one. Now he’s a husband, a dad, and a story teller. Back as a kid he would swallow books whole, without chewing. Now he’s returning the favor. Eat up.


REVIEW
First, a little about his new release, Brain Storm:

Twins Alex and Sasha are in the small town of Maple Junction and their summer vacation quickly turns into a summer nightmare. Everyone is being controlled by an unknown sinister force. A primitive sinister force. On the streets it's back to the Stone Age. Calling for help is not an option. The only allies are a group of small children. The twins can trust no adult, not even their own father, and at times--not even themselves. But someone must stop the madness.


My review:  Brain Storm was one of those fun easy reads, that you sit down and open up only to find yourself a few hours later closing the last page and thinking, “WOW, that was quite the ride.”  I was expecting brain eating zombies and instead I got a wonderful story about zombies but with quite an unexpected twist.  Who is controlling who?  Who is in charge?


The fact that the human race is reduced to animals in our most primitive form was such an in your face idea.  I loved it.  No sex, thank goodness.  Oh there are hints of the sexual nature of humans, but not anything more than that.  It was all horror and gore and just grand.


What was one thing I liked the most?  The fact that children were the ones that had to find a way to save the day.  Not only did they do it themselves, but they found an explosive and ingenious way to get there.


What was one thing I liked the least?  There were so many great sidelines going on.  I think they could have been flushed out a bit more.  Not because they weren’t complete, but because I am greedy and just wanted more.


This is a great read.  You truly can sit down and simply enjoy. I will definitely be keeping an eye on this author and looking forward to what else he can create.

For a bit of extra fun, I decided to find out a bit more about this author.  So, here is a short, but fun interview with Author, Edward T. Keller:

A:        Upon reaching thirty I realized why grown men keep sucking their bellies in. Because they have bellies. An astounding development. But I can still pose for covers of paranormal romances aimed at balding plump dudes.
2.         What are you currently working on?

A:        I’m doing a final edit of an end of the world epic. It took only five times longer than planned. Now that it’s almost finished it no longer looks like it will be the most awesome book ever, but seducing a good agent with it is quite possible.

A:        The Saint, of course. The cultivated and good-humored version of Bond.


A:        My very first story was for a university magazine, and was about a village of survivors after a nuclear holocaust. It wasn’t very popular.

A:        The future is awash in potential. I hope to fulfill at least part of it. Becoming a professional successful author is one goal I’m very much focused on. Possibly I’ll try my hand at teaching next year as well. If nothing works out I’ll fall back on TV scriptwriting, but I hope to avoid that. Too grueling.


6.         What resource has been most influential in helping you become a published writer and why? How often do you refer back to it?


A:        The Duotrope and Ralan websites. Best places to find the right indie publisher to submit too. These days I’m exploring Absolute Write, sifting for agents.


A:        The initial conceptualization and outlining – this is when the world and the characters populating it take shape, and it feels so awesome. Then comes the drafting, the fleshing out, and the editing, and they are all sooo demanding.


A:        Reading, listening to music, and everyday family guy activities. Periodically I pick up the guitar, plunk a few riffs, and promise myself to play more often.


A:        Impossible to say. Blade Runner, Tideland, The Holy Mountain, Dune – they are all awesome.

A:        When traveling, having an e-reader with a whole library inside is very handy. When relaxing at home, or choosing a present for someone, a printed book is my first choice.

Posted by Courtney Rene at 6:31 AM