Hello!  Made it back from my trip and thought I would share our trip in full, not just the “author” stuff.  So here we go.
Day 1:
Thursday, started off the same as any other day.  Got up, got the girls off to school, and myself off to work.  Same ole, same ole.  Then around 11ish, I got a call from home saying I needed to come home immediately, something was wrong with my dog.  Now most of you should know, my dog is my sweet boy, that I love.  I don’t mean I like him when he’s sweet.  I love that dog.  All the time.  Hair, slobber, mess, and all.  So I race home.  I made the 20 minute drive in 12 minutes time, in the pouring rain.  Apparently, my 9 year old dog, decided he was going to have a seizure, the day we are suppose to leave.  He has never had one before and it was scary as all heck.  Foaming at the mouth, shaking, disoriented, eyes rolled back, and mean to my husband.  I bound in the house at break neck speed to find him lying on the floor.  He sees me, I see him.  He crawls across the floor on his tummy to get to me, and I drop down to the floor to get to him.  He proceeds to crawl on top of me and cry something terrible.  It broke my heart.  The tears shed were monumental.
The vet was called and he said, no worries (WHAT?).  5% of all dogs get them once in their lives and to just watch him.  That’s it.  Hmmm okay.  So I do.  After about an hour of crying and panting, he finally started to feel better.  He ate, and drank and bounced after me outside and was frankly, back to normal.  I still was nervous about leaving him, but Grandpa promised to take good care of him.  So I was talked into leaving.
Sidney came home, we packed up the car, we picked up Seren from school, and off we went to the airport.  I was more worried about my dog at that point than I was about my first ever plane ride.  That is until we got on the plane and I was then completely focused on the plane.  We made it through security.  It wasn’t too bad.  I did have to do the full body scan which sorta creeped me out, but since no one had to actually touch me, it was okay.  We filed onto our plan and I sat down.  The rumbling of the plane was a bit scary.  The take off was really scary.  The first 15 minutes I sat statute still to make sure I was going to survive without barfing all over the place.  The next 15 I tried to read the Skymall magazine.  Then I pulled out the ipad and watched Footloose (it was all right).  All in all it was going well.  Then we landed and aside from the fact that my foot brake would not work, it was a safe and sound landing into Phoenix.
From Phoenix we took an express plane (think tiny) to Tucson.  Again the take off was all right, a bit on the bumpy side and a bit more nauseating, but livable.  It helped that it was literally up and down.  We were up and down in about 25 minutes.  We made it to Tucson around 10:30 pm.  We got our rental car, and off we went in search of our hotel, the Doubletree, by Hilton in Tucson.  Very nice.  We were giving warm chocolate chip cookies at check-in along with Scorpion warnings (eee!).  No towels on the floor; pick up all clothing;  zip up all bags;  close all purses; hang up all coats;  on and on it went all while we stood mouths a gap with a warm cookie in hand.  We checked out the room out for critters, dropped our bags, and crashed as remember it may be 11:00 p.m. in Tucson, but it was 1:00 Ohio time.  We were pooped!
Day 2:
We wake up at the butt crack of dawn, meaning around 5ish Tucson time, but we’re up, so we get a move on, shower and dress and get ready for the day.  Here is a photo out of our view. 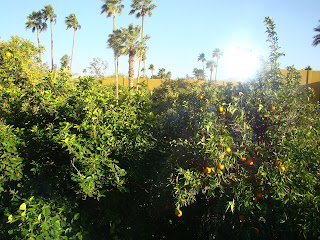 Lovely eh?  Oranges right outside our window.  Scorpion apparently love oranges.  Great
We are expecting 80ish weather.  That would be a big nope.  Cold outside.  Freaking figures too.  Its 47 and expected to only get up to around 60.  So we go back in and change from shorts to jeans with jackets.  Then we step out for our first venture in a new land.  Tucson is…dirty.  Sun washed out browns and tans and yellows and greens, and enough dust to choke on.  Everything looks worn and old.  I am not saying it is, I’m saying it looks it.  What grass there is, is brown and dry and brittle.  Most of the lawns are gravel and weeds.  I was not expecting that.  I suppose that was naïve of me, as it is in fact a desert.  Duh. 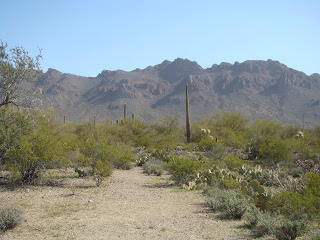 We drove out to the Desert Museum.  On the way, there were mountains all around us.  Loads of them and instead of trees dotting the ground there were cactus’.  Saguaro Cactus’ to be exact (see I can learn).  Then we had to drive all the way almost to the top and over a mountain to get there.  The Museum was loads of fun.  There were caves, and animals, and reptiles, and fish and frogs and so much to see and learn and oooh and aaaah over.  We spent quite a bit of time there just wandering the trails and learning about the plants and the desert animals.  It was fun.  Cold, but fun nonetheless. 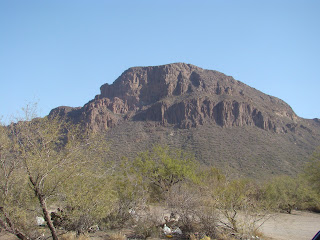 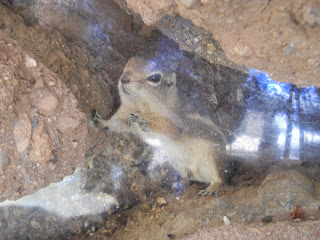 After the Desert Museum, we stopped at the National Wildlife Museum (It was on the way back down the mountain).   Stuffed animals and skeletal remains of every kind imaginable.  Including a few fables like unicorns, matadors, and mermaids, complete with history lesson.  There was a mammoth, which was so cool to see.  We have one in Ohio, but it’s behind glass so you can’t get right up next to it.  This one was RIGHT there in front of you.  So cool to see and touch (shhhh not sure if we were suppose to touch….). 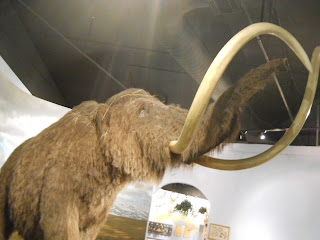 After the Wildlife we headed back down the mountain.  There were a few scenic views and climbing trails so guess what we did?  Yup.  We had so much energy still in us that we decided to climb around the mountain and see what we could see. 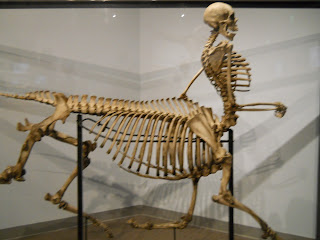 After that we were truly tired.  We headed back to the hotel to clean up and then go find some food to eat for dinner.   After which we found a nice mall to roam for a bit before we went back to our hotel and called it a night around 10 (after first checking the beds for bugs).  All in all we had a lovely first day.
To be continued (I know that is just so mean….)
Posted by Courtney Rene at 5:32 PM